Some people, it seems, will do almost anything to avoid hiring a band, (Sorry, Bill; couldn't resist the cheap shot.)  The truth is, Bill Prince is no one-man band - but if it weren't for Rick Kirkland he would be!  Kirkland plays drums on Prince's spectacular new "big-band" album, Happy Thoughts, and Prince plays everything else.  That's right - trumpets, trombones, reeds, even piano and bass!  How does he do it?  That was the first question that sprang to mind as I listened to this awe-inspiring tour de force by an enormously impressive but relatively unknown musician from Jacksonville, FL, thinking all the while - as I laughed out loud at the sheer improbability of what I was hearing - that there should be a law against anyone harboring that much talent in one body (shades of James Morrison!).  Here's how Prince explains it: "Creating this CD was a four-step process.  Step one involved developing sequenced bass and piano tracks.  Then, the horn parts were recorded.  The next step was the addition of the drum tracks by Rick Kirkland.  For the final step I replaced the sequenced rhythm tracks with live bass and piano.  The end result is a live recording.  The entire project spanned a two-year period."  And the result, we should add, was well worth waiting for.  Oh, and did we mention that Prince also wrote and arranged every song on the album?  Yes, that too.  And not one of them is second-rate.  Solos?  They're amazing as well.  Prince even changes his "personality" (musical ideas) while improvising on various instruments, and on the same ones too, as for example his several disparate trombone solos on "Bone Amis" or trumpet "duels" on "Lester's Leap" or "Song for Two Trumpets."  In a blindfold test, I'd suspect only the most knowledgeable and perceptive jazz connoiseur could tell there's only one person playing (or less than a dozen, for that metter).  What else does Prince do?  Well, on "You Be That Way" he used five clarinets in unison, much like a saxophone section, to pay homage to Benny Goodman and other clarinet maestros; pairs trumpet, soprano sax and electric piano on "Samba de Oro," features trumpets and baritone sax on "Lester Leaps," clarinet again on "Ebony Dance," two C flutes, two alto flutes, two flugelhorns and three trombones on "Lila," uncloaks a warm, well-modulated tenor sax on the ballad "Lush" - and we've barely scratched the surface.  Kirland, meanwhile, has his moment in the sun on "Aw! Gimme a Break," dedicated by Prince "to all those drummers who are relegated to keeping time and never get a chance to shine."  Kirland shines.  Happy Thoughts - as Prince writes, "That's what this CD is all about."  And if you're not happier than before after listening to this thoroughly tasteful and charming album, I honestly don't know what it would take to put a smile on your face.

There are few musicians who can play virtually every instrument in a jazz band, fewer still who could sound professional playing a bebop trombone soli or swing clarinet passage, and yet fewer still who can solo effectively on all the instruments, much less compose and arrange for them.  The only person I know who has documented such expertise is Bill Prince on his outstanding CD, "Happy Thoughts"; and his performance and writing is at such an incredibly high musical level that you will simply not believe it can be achieved by a single individual.  Get the CD, and get inspired by the best! 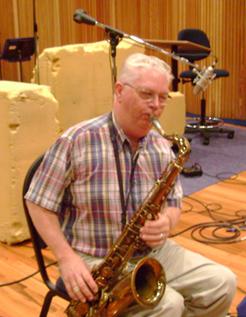